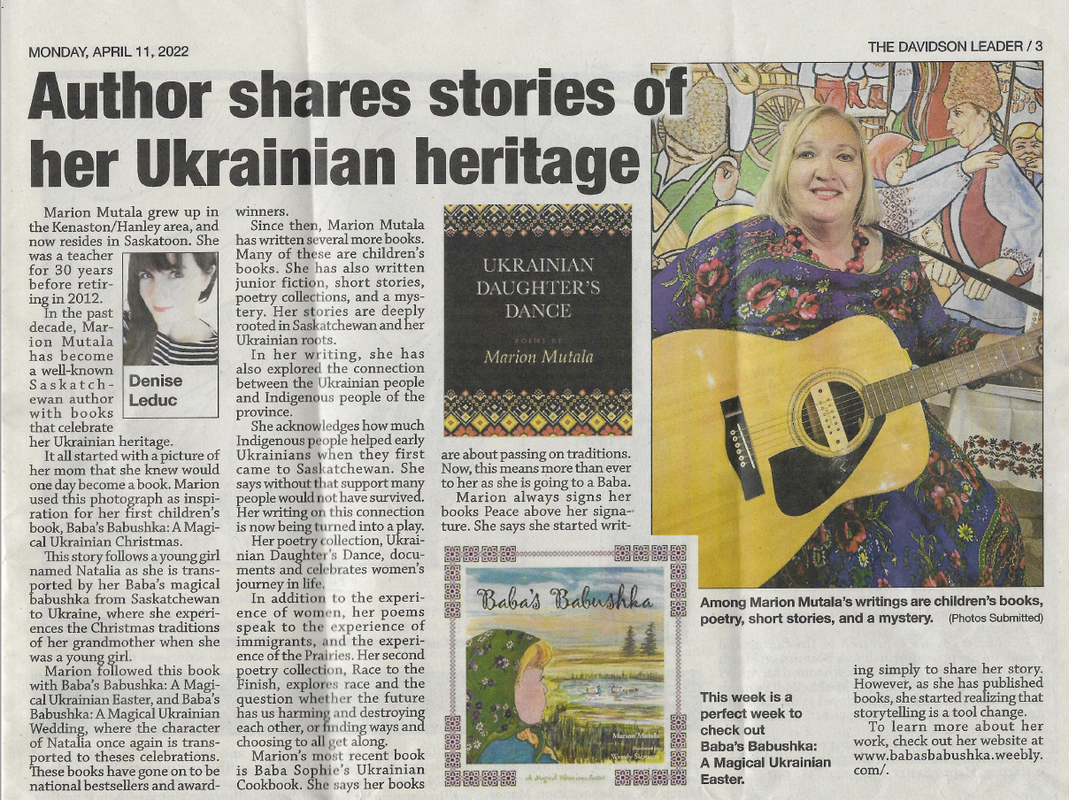 Episode 114 - Marion Mutala  - Jul 16, 2021Marion Mutala has a master’s degree in educational administration and taught for 30 years. With a passion for the arts, she loves to write, sing, play pickle-ball, play guitar, travel and read. Marion is the author of the National Bestselling, Award-winning Children’s Books series, Baba’s Babushka. 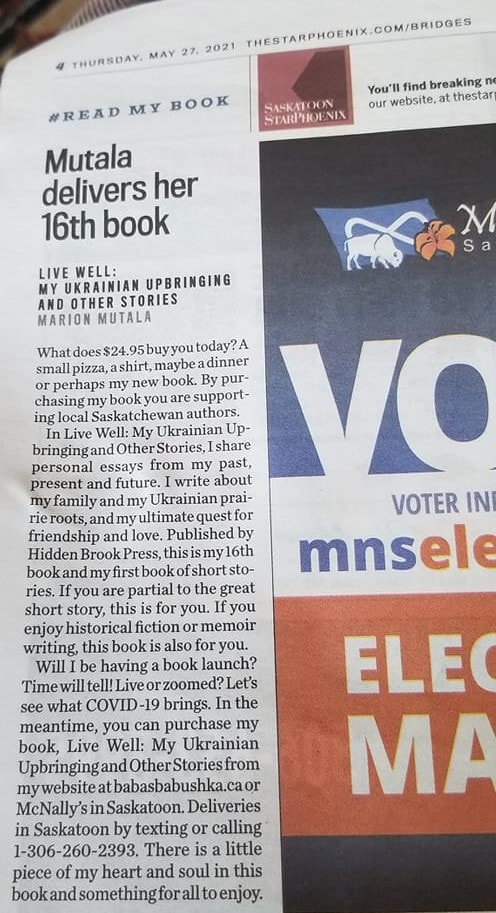 Long-time readers of Yorkton This Week might recall the name Marion Mutala.

Way back in 2012 the Saskatchewan-based author was in the city giving readings from Baba's Babushka:A Magical Ukrainian Christmas and Easter, a children's book drawn from Mutala's Ukrainian heritage.

Then in 2020 an article appeared regarding the author's release of My Dearest Dido: The Holodomor Story a passionate account of the Great Ukrainian Famine of 1932-1933, known as the Holodomor. Based on actual events and documented eyewitness accounts, this story consists of correspondence between two fictional characters – Hanusia Hrabowa in Saskatoon and her grandfather, Dido Bohdan, in Hafford, SK, supplemented by Hanusia's personal diary. The book is now available in audio form too.

And now Mutala, who grew up in the Hanley/Keaston area, but has lived in Saskatoon since 1980, has released Baba's Babushka: A Magical Journey to Ukraine which follows Baba's Babushka: Magical Ukrainian Adventure which has her first book in the series.
Tell us a bit about the story? Genre?

Read My Book: Baba's Babushka now an anthology
Baba and Dido and Natalia go to Kyiv to see all the magical historical sites.

​​Congratulations to the following honourees who were formally presented last Sunday:
Former CBC journalist and producer Rosalie Woloski talks to the award recipients one-on-one and gives us a sense of who they are and "what makes them tick.
​
National Best-Selling, Award-Winning Author to visit Battlefords – November 20
​https://battlefordsnow.com/2019/11/18/national-best-selling-award-winning-author-to-visit-battlefords-november-20/
Nov 18, 2019
The book launch will be part of the Holodomor Commemorative event at the Chapel Gallery on Wednesday, November 20, at 7:00pm, doors open at 6:40.
has penned her 11th book.
My Dearest Dido : The Holodomor Story is a haunting account of the innocent victims of Stalin’s vicious regime known as the Holodomor. The Holodomor, or “death by starvation” took place during the winter of 1932-1933 in Ukraine.
The story is based on the voices of survivors and told through the eyes of Dido Bohdan and his granddaughter Hanusia. The Holodomor, or great Ukrainian Famine, was engineered by Joseph Stalin as a way to decrease, if not eliminate, the attitudes of political independence among Ukrainian farmers who were not keen on the economic policies inside the communist Soviet Union.

Death by starvation was Stalin’s attempt to control Ukraine by starving millions of families, and re-populating empty villages with communist-minded Russians moved in to settle the country. Stalin achieved the Holodomor by silencing the media, sealing the borders, removing all foodstuffs, and destroying all methods of food production such as pots, ovens, etc.
The cover art of the book is beautifully and powerfully illustrated by Ukrainian artist Olha Tkachenko, who has illustrated two of Mutala’s other books. The Baba Babushka series is very popular; My Buddy Dido was short-listed for a Best Children’s Book nomination award at High Plains Book Awards in Montana, USA.
The launch of My Dearest Dido will coincide with Holodomor Awareness week across Canada during the 4th week of November. Schools in the Battlefords will participate in a variety of events intended to increase awareness of the Holodomor genocide. Marion will be doing school visits during the day.
Everyone is invited to attend the Holodomor Commemoration event at the Chapel Gallery at 7:00pm on Wednesday, November 20. My Dearest Dido is available at www.amazon.ca. Visit Marion Mutala’s website at www.babababushka.ca

Remembering the Holodomor Ukrainian famine and genocide - by Angela Brown
https://battlefordsnow.com/2019/11/21/remembering-the-holodomor-ukrainian-famine-and-genocide/
Nov 21, 2019
Denied food and sustenance, millions of Ukrainian families starved to death in the Soviet Union from 1932 to 1933 in what is known as a famine and mass genocide.
Marion Mutala wanted to tell the stories of some of the families affected by the tragedy and those who lived through it, so more people would learn about the Holodomor and would never forget.

The Saskatoon-based award-winning author read from her new book My Dearest Dido: The Holodomor Story at the annual Holodomor Commemorative event in North Battleford Wednesday night.

She described the dictatorship rule under Joseph Stalin as a tragic period in history that resulted in the death of from four to 12 million people. Mutala said Stalin wanted to get rid of Ukrainian culture. Eventually, people weren’t allowed to speak their language. She related he wanted to banish the churches and icons, as well, and “all things that are important to Ukrainian people,” as part of his plan to seize their land.

People protested and tried to fight back, she said, but Stalin essentially locked them in the villages so they weren’t even allowed to leave.
“There was no food. Soldiers came and took away the seed grain, everything. So basically they starved to death,” Mutala said.
“It’s a horrific thing to talk about. When you research it to see that this happened to real people; it’s very disturbing,” she added. “I didn’t think I could [take on the project]. But I think the Holy Spirit inspired me how to do it, by inventing these characters writing to each other, and then the story unfolds in the letters.”
During her presentation at the Chapel Gallery Mutala who is also a retired teacher read an excerpt from My Dearest Dido accompanied by Jim Shevchuk, a superintendent at Living Sky School Division.

A word about MARION MUTALA - by Miguel Ángel Olivé Iglesias, CCLA Cuban President, Editor-in-chief of The Ambassador, Assistant Editor of The Envoy